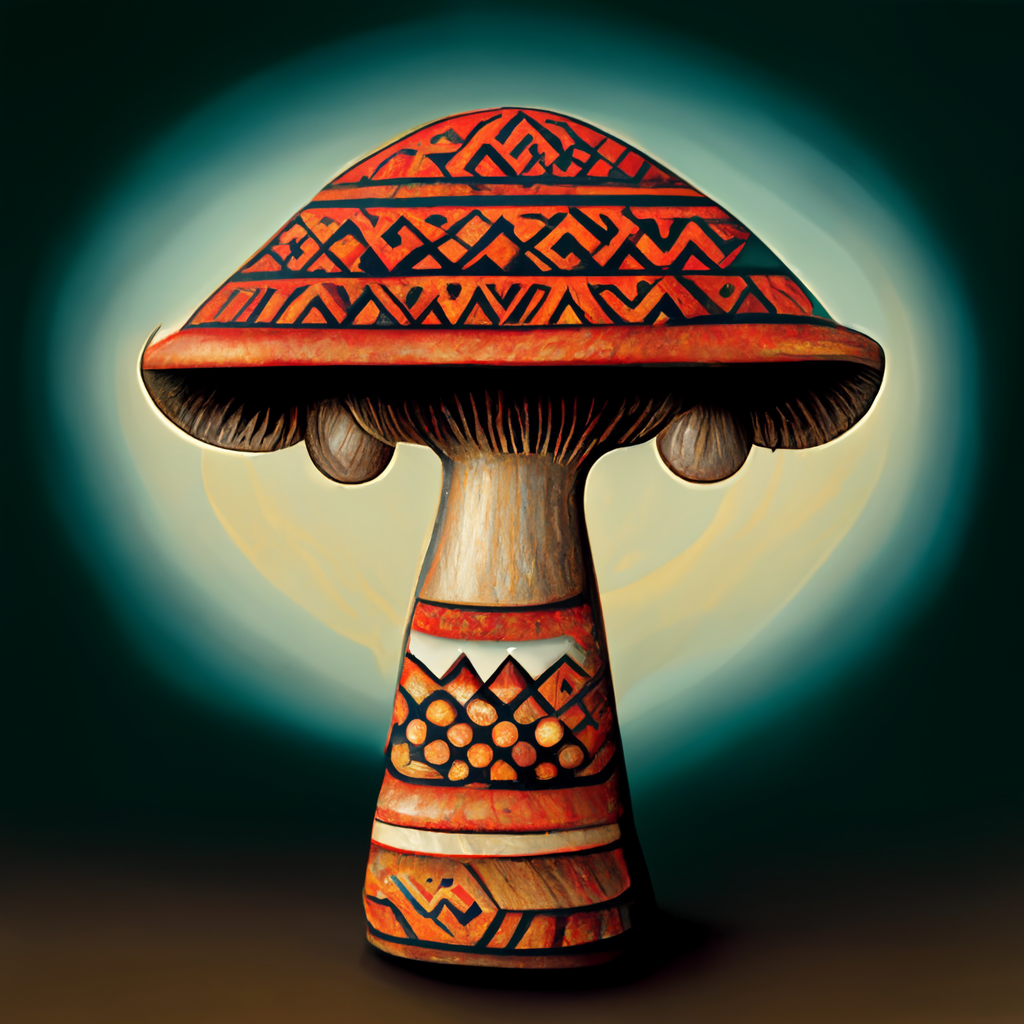 Psilocybin, magic mushrooms, or shrooms. Whatever you call it, this classic psychedelic grows all over the world and is one of humanity’s oldest tools for divination and healing.

Psychedelic mushrooms have a long history of use across the world. They are depicted in stone paintings between 9,000 – 4,000 BCE in North Africa, suggesting that the indigenous peoples may have used them. Psilocybin was used religiously in Mesoamerica for thousands of years. The Aztecs called it teonanacatl, or “flesh of the gods.”

Let’s learn more about them.

What Are Psilocybin Mushrooms?

Magic mushrooms are a category of psychoactive mushrooms belonging to the psilocybe genus. They can grow in many climates and are found on every continent. There are over 100 different species, the most common one being Psilocybe cubensis. Each species has variants or strains. Psilocybe cubensis’ variants include Golden Teacher, Penis Envy, Blue Angels (Psilocybe azurescens) and Liberty Cap (Psilocybe semilanceata).

Mushrooms are consumed raw or included in food, teas, or brews.

The outcome of the trip is highly influenced by intention and setting. Yet studies show that participants consistently ranked psilocybin as their top-five or single-most significant spiritual event. Users report an improved sense of wellbeing, interconnection, a renewed appreciation for life and nature, a higher understanding of meaning and order, and encounters with god or other spiritual deities.

Science has revealed that during a psilocybin experience, the brain is under intense reconstruction.

What Makes the Mushroom Magic?

Psilocin does two big things: it activates the 5-HT2A receptor, and G-protein coupled receptors via brain-derived neurotrophic factor (BDNF). Allow us to explain.

G-protein coupled receptors are abundant and mediate most of our cellular responses. BDNF is a gene that makes proteins for neurons, modulates neurotransmitters, and neuronal plasticity, which is the brain’s ability to change and rewire neural networks. Both are essential for memory and learning. By activating the receptors, psilocin sends the brain through a series of effects that can increase brain plasticity, regeneration, and neurogenesis.

5-HT2A is a type of serotonin receptor. Serotonin is wildly important to our sense of well-being. It mediates several functions, including mood, sleep, and digestion. Imbalances can cause physical and psychological problems. Psilocin has a similar chemical structure to serotonin. It reacts as an agonist to 5-HT2A. The reaction does three things:

But what does all of this actually mean?

Glutamate plays a role in mediating cravings and addictions and is responsible for healthy brain functioning. Many people with alcohol addictions have a deficiency in their glutamate brain pathways.

Dopamine allows us to feel pleasure, satisfaction, and motivation. Dopamine and serotonin both play roles in controlling our reward system. There is evidence that because psilocybin interacts indirectly with dopamine pathways, it has low abuse potential and can rewire the reward pathway for those suffering from depression, anxiety, and suicidal ideation.

When someone has depression, there is usually hyperactivity in three areas of the brain:

When activity in this part of the brain goes up, it can make people less responsive to the world around them because they are trapped in it. Incessant internal chatter is also a hallmark of depression and anxiety. We worry about the past, future, present, other people, and ourselves.

Psilocybin reduces activity in the medial prefrontal and posterior cingulate cortices. This offers a scientific explanation for feelings of ego dissolution and a more open mind that users report.

Under federal law, psilocybin is a Schedule I controlled substance as determined by the Controlled Substance Act (CSA) of 1970. Schedule I drugs are considered to have no medical potential and a high risk of abuse. Possession is punishable by felony charges. Heroin, LSD, and marijuana (cannabis) are also Schedule I substances.

Because psilocybin has a low risk of abuse and many medical uses, multiple initiatives are taking place across the country to reschedule psilocybin. Some cities and states have overcome the misclassification and have relaxed their laws for small, personal amounts. Psilocybin is decriminalized in Oregon, and several cities, including Ann Arbor, Denver, Oakland, and Seattle, have deprioritized criminal penalties. Here is a map of updated psilocybin laws.

Psilocybin has the most favorable safety profile of all psychedelics. However, there are some things you should be aware of.

Some psilocybin mushrooms look similar to poisonous mushrooms, which are notorious for blending in and can have serious consequences. Liberty Caps get their name from their spear-shaped head, which looks similar to Conocybe filaris, a mushroom with the same poisonous mycotoxins as Death Cap mushrooms. But don’t be afraid of mushrooms. Educate yourself on what they are so you can make safe decisions and only explore with experienced guides.

As with any psychedelic, you need to be aware of a “bad trip.” Undesired or even traumatic experiences can cause distress, fear, lack of coordination, altered visual perception, loss of sense of self, panic attacks, traumatic flashbacks, paranoia, and short-term psychosis. Nausea, vomiting, headache, chills, and drowsiness can also occur.

Common factors that can negatively influence a trip are taking too much unknowingly or without being prepared, being in an unsupportive or uncomfortable environment, and combining psilocybin with alcohol or other drugs. People with a personal or family history of certain psychiatric issues are also generally discouraged from using psilocybin and other psychedelics.

Sometimes a “bad” trip can be a good thing. Healing requires us to confront our darknesses and work through them. Tripping responsibly is the difference between a constructive and a destructive experience.

Psilocybin can teach us more about ourselves and the world around us. What was your experience with psilocybin like? Check out our events calendar to share your thoughts with other like-minded souls at our next meetup.

Charlotte, NC: Cohoba, a local non-profit organization that advocates for equitable psychedelic assisted therapy, is announcing the first annual CohobaFest, a night of arts, community, and psychedelic education. CohobaFest will be hosted within the Visual and Performing Arts Center (VAPA), at the OBRA Collective gallery on Saturday, July 30, from 5-9pm.

The suggested donation for attendance is $25. Tickets are available via EventBrite.
CohobaFest will feature Victor A. Cabral, a licensed social worker who is producing the
documentary Transcendence, which explores the reemergence of therapeutic and ceremonial psychedelic medicine through the experiences of BIPOC individuals. A working clip from the film will be shown, followed by a discussion moderated by Cohoba therapists. CohobaFest will also feature the talents of local BIPOC artists and allies in a psychedelic gallery show.

Beverages will be available by donation, and local food trucks will be on site.

By attending CohobaFest, you will help advance Cohoba’s mission of providing harm reduction workshops, educational training opportunities, and accessible therapy. Reserve your tickets today and come celebrate with us!

About
Cohoba is a BIPOC-led 501(c)(3) non-profit organization located within the VAPA Center. We
are psychedelic-positive therapists, bodyworkers, advocates, and artists. Cohoba’s clinicians
have received training in psychedelic therapy from the Multidisciplinary Association for
Psychedelic Studies (MAPS) and Fluence. Together, we seek to advocate for collective
prosperity and to celebrate the human experience. Join Cohoba the last Wednesday of every
month for our Charlotte Psychedelic Society Meetings. Follow us on Instagram @ cohoba.
For more information about Cohoba and CohobaFest, contact Laura Camilo, LCSW, or visit
Cohoba online at cohoba.us.